The problem in doing business
Trust is one of the most powerful currencies in business. It is a scarce resource in current times. How much I can trust my counter parties? Should I trust a new provider? Which details about my business should I share with my suppliers, and which shouldn’t? Trust is closely related to person’s or company’s identity.
To increase trust in doing business companies use trusted 3rd parties services that however impose/present additional costs. There are many types of such trusted intermediators. People, organizations and institutions — such as banks, lawyers, regulators, public agencies, and others – are paid to establish trust.
As technology evolves, business interactions have started to become more and more digitalized and automated. It first emerged internally between company’s systems, then appeared in B2B and B2C business models as well. Data processing is no longer limited to company’s data centres. It is not just because of cloud computing. Internet drives global connectivity and data growth.
The internet wasn’t built as a secure network. And it is not a trusted place now. But we live, do business, pay taxes – more and more in the internet. Data processing happens everywhere: on smartphones, in sensors located all around the world, in our cars, homes, on the streets.
There were more than 4 billions records leaked in 2014 and 2015 based on IBM X-Force Threat Intelligence Index 2017, and average cost per record breached was 158$. Current security models need to be replaced by newer approach: security through transparency. Trust will otherwise be hard to implement, and much more expensive to guarantee.
Digital trust
Blockchain as a concept was introduced in late 2008. Since 2009 we have bitcoins in place, the first application which uses blockchain. Because bitcoins provide peer 2 peer payment capabilities, there was perception for years, that this technology is a main disruption for financial services and payments. But it is not limited to the above. Based on WEF, 24 countries evaluated this technology for government and public related services use cases. Central banks are interested even more: cash management is costly (for economy) and inefficient at the same time giving too many possibilities for frauds. Digital currencies and digital money are key topics discussed by central banks while they investigate Distributed Ledger Technologies 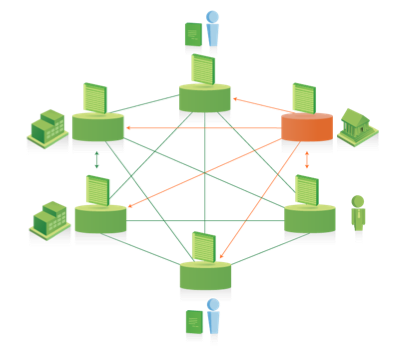 Blockchain technology can provide digital trust capabilities, making it possible to conduct transactions without a third-party intermediary (thus eliminates the additional cost). Blockchain provides decentralized approach in business transaction processing. It allows to value exchange between counterparties with high level of cyber-security because it uses smart cryptographic’ algorithms. A decentralized, technology based trust is new concept, and it seems to be the only option for the future of the digital economy.

Importance of identity in digital economy

Only 62% of adult global population has access to bank account. There are 1,5 billion of people which cannot confirm formally their identity. Lack of formal identity limits access to public and financial services for those people. Digital identity is critical enabler of the development of emerging countries and their economies. It is critical to improve inclusion of public and financial services. Digital ID can help fight with frauds and abuse of public services in mature countries.

Based on those statistics it is clearly visible that technology such as blockchain and global mobile coverage – both can help address identity challenges and increase financial inclusion.

There are digital ID solutions based on innovative approach already functioning in several countries like; e-residency in Estonia, Aadhaar identity solution in India (mobile phone + bank account + national identity number) or mobile financial services in Africa based on mPesa.

There are around 20 billions of Internet of Things (IoT) devices, and this number is growing fast. The IoT makes physical, analogue objects to be recognized in digital world. Those devices need to communicate with each other: do transactions between them or exchange data. And they will need to confirm their identity as well. To get benefits from IoT we will need to implement a higher level of business automation than we currently have and there is a need for digital decentralized trust capability to be available not in the future but NOW.

World Economic Forum mentioned blockchain as 3rd top emerging technology with biggest impact on future economy. Artificial intelligence, Internet of Things and Blockchain together, will impact our life, digitalization and business automation  during the next few years. Blockchain can be a fundament for digital trust and digital identity, and it underpins an interconnected world and democratic future.